The call came in via Facebook – a cheesey emergency. What to do with a kilo of Fromage Blanc?

My friend Helen was in Guinea when she reached out, telling me that whilst she could get French cheese and wine, other supplies were limited. Fromage Blanc is a fresh, cow’s milk cheese often made from skim milk that is very low in fat and Helen had a load of it.

The girls from Cowgirl Creamery in the US came to the rescue with a glorious recipe for grilled cheese sandwiches.

They recommend combining two or three cheeses, using a soft cheese like Fromage Blanc as a ‘suspension’ for the heavier cheese particles, much like egg whites in a soufflé. How could I resist? 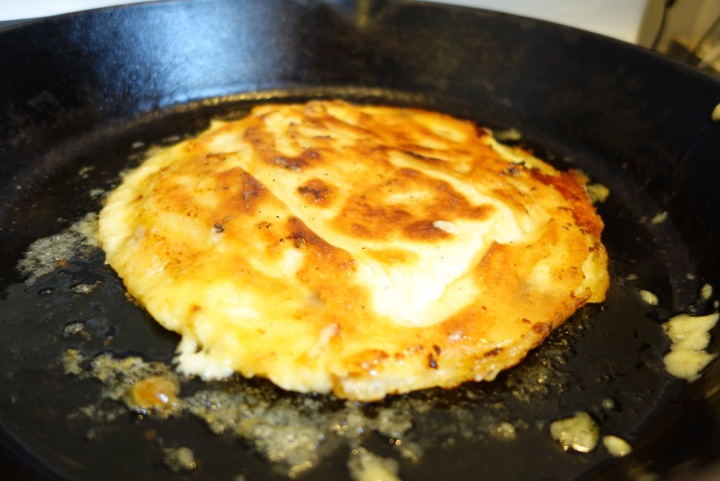 The American-style Grilled Cheese differs from the standard Kiwi toasted sandwich in that it has a top and a bottom, and it is fried in butter on a cast iron skillet.

Fried bread was a treat when I was a kid, but the heart health and fat police have banished it from our kitchens. I love the idea of its return, ‘Grilled Cheese’ sounding rather more hipster than the ‘Fried Cheese Toastie’ which is how I translated it into New Zealandish.

I chose one of the flatbread sandwich recipes in the Cowgirl Creamery Cooks cookbook as I reckoned Helen might get flatbread easier than loaf. But you could use either, just make sure there’s a good surface for frying.

I’m not much one for following recipes, but I wanted to try it because I’d described to Helen on Facebook. So armed with the recipe I headed shopping, only to find New Zealand doesn’t do Fromage Blanc, at least not at my local food stores, so I substituted Kwark or Quark, another light, fresh cows milk cheese.

Funny thing is now I have a load left over and I’m left wondering what do I do with Quark? But that’s another post.

Mix grated cheese and fromage blanc in a bowl

Heat the butter in a skillet over a medium heat. When it bubbles, put in one flatbread, cut side up.
Sprinkle half the cheese mixture, and let it heat for a minute or two while the cheese melts a bit. Dot some of the chutney over to taste.

Spread some mustard on the cut side of the matching flatbread round. Place it cut side down on the melted cheese sandwich in the pan.

Let it heat for 2 -3 minutes, then carefully turn the sandwich over using a spatula. Heat for another 2-3 minutes.

Turn the flatbread onto a plate, cut into quarters and serve. Repeat with the remaining bread and, cheese, chutney and mustard.

One thought on “Help! What to do with Fromage Blanc?”