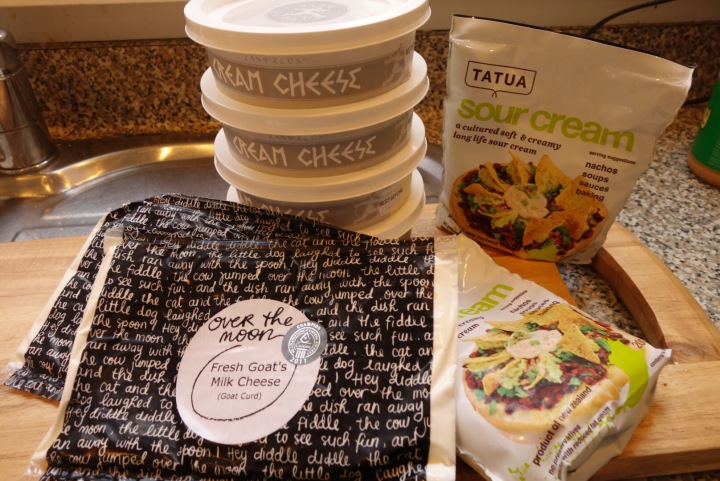 What’s the collective noun for dairy I mused while assembling the fixings for a goat’s curd cheesecake? A dollop of dairy? A cluster of cream? A culture of cheese? Because there is a lot of dairy in a cheesecake, almost a kilo and a half.

My first recipe option ruled itself out as I totted up the cost of 1kg of goats curd, around $70 and more than I wanted to spend on a dessert for a mid-week casual dinner with friends.

So I opted for one with goats curd, cream cheese and sour cream which more fit the bill and got me thinking about the differences between said dairy. Often these are ingredients added without much thought to their taste or texture. 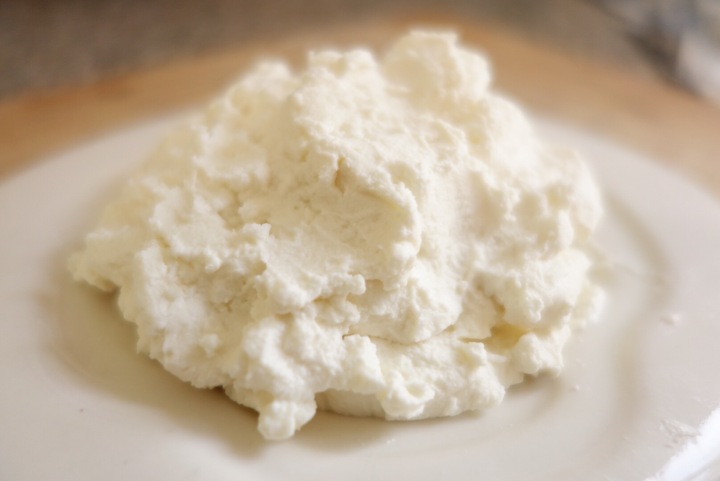 Goat’s curd and cream cheese are both fresh cheeses, starter bacterias are added to milk or cream to create a curd, and then the whey is drained off. That’s the traditional way to make cream cheese, as now commercially it is made by adding stabilisers to thicken the cream, rather than bacteria. The goats curd is dryish and crumbly, tartly sucking the moisture out of my mouth like a sour sweet. Cream cheese is dense and silky slick, its gentle acidic sweetness glides across the tongue.

Sour cream on the other hand is more like yoghurt, where a starter bacteria is added which sours and thickens the cream, with no draining needed. It’s lighter, with a texture like whipped cream, lemony but with a definite savoury tone. 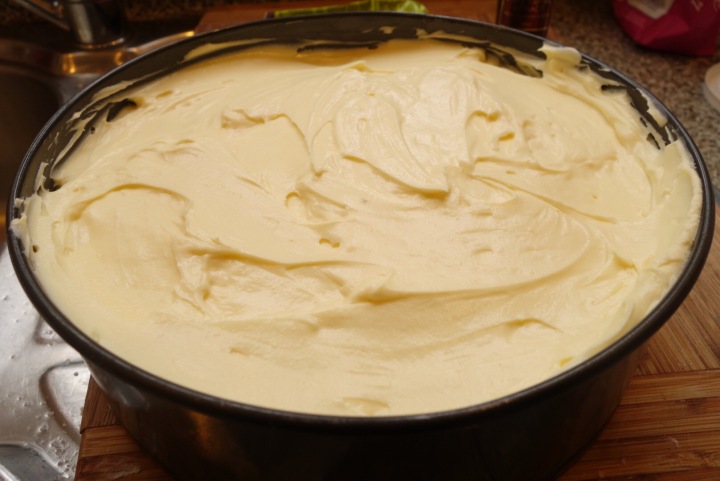 The recipe calls for it to be served with lemon curd. Lemon curd is not curd at all, more of a custard. My Grandma called it lemon honey and we ate it on toast. It’s made with butter, sugar, eggs, lemon juice and zest cooked in a pot on the stove. Early recipes may’ve literally been curds, with lemon juice added to separate curds, which were strained through cheesecloth. Thanks British Food – a history blog.

As a cheesecake novice I cooked the cake for an extra half hour hoping the centre would firm up, it didn’t, staying quite wobbly when I took it out of the oven. As a result the cheeses seemed to reduce down further, forming a crust of the most delicious toothsome and chewy caramel.

Watch out though, this cake had a soporific effect on the dinner guests, as once we’d scoffed we soon happily headed home to bed, replete with bellies full of curds of both kinds.

Crust
This is an almond flour crust. You could also use a biscuit crumb base too.
2 cups almond flour
1/4 teaspoon salt
2 tablespoons coconut oil
1 egg

To make the crust, Place flour and salt in a bowl, rub coconut oil into it til it resembles breadcrumbs. Lightly beat the egg and add. Mix till it forms a ball. Press into the pan is a layer across the bottom.

In an electric mixer, beat the cream cheese until smooth and creamy, about 5 minutes.

Beat in 1 cup sour cream, Goat’s cheese, and sugar. Beat until the mixture is smooth, about 2 to 3 minutes. Scrape the sides of the bowl occasionally.

Beat in the eggs, one at a time. Add the vanilla and lime juice and continue to beat until the batter is full incorporated and smooth. 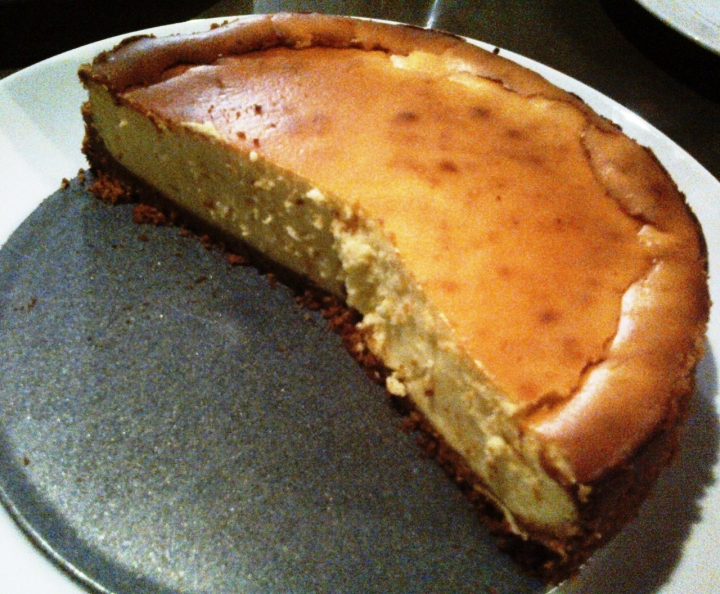 Sorry no pictures of the final cake, too busy eating it, so I’ve borrowed a photo to show you what my cheesecake looked like, care of thecutebaker.com. My cheesecake recipe is based on one from the Cooking Channel TV.