It was with some trepidation I tasted Galaxy Blue Vein, the Franken-cheese my mother ate throughout my childhood.

Blue Vein was a wonderful solitary pleasure for her. She giggled recently when I asked her about it as she remembered the private pleasure of the cheese the rest of my hungry family wouldn’t eat. An exotic step outside the ordinary block cheddars and colbys that made up the cheese landscape in 1970’s New Zealand.

It’s not the first Kiwi-made blue cheese, a Stilton-like cheese was made in Invercargill from the late 1800’s to 1936, but Galaxy Blue Vein has been made since the 1950s. Danish cheese-makers made it in Eltham, Taranaki for the Rennet Company.

Blue Vein is a classic on our supermarket fridges, and one I’ve over-looked for years, in favour of the more creamy blues that Kapiti and Whitestone brought to the shelves. But once in a while it’s good to go revisit the past.

And I must say I have been delighted by the foil-wrapped wedge of this Kiwi classic. Far from a sharp, harsh cheese, I found it found an easy to eat, tangy blue. Creamy and with a hint of citrus, what a surprise. And even better, at around $4.00 per wedge, I reckon you can’t go wrong.

Just wake sure you warm it up to room temperature.

Also a good tip with blues is to scrape off any liquid on the outside of the cut surface. Blue cheeses aren’t fully pressed so continue to expel whey which can bring bitterness to the cheese. This is why they’re often wrapped in foil not paper. 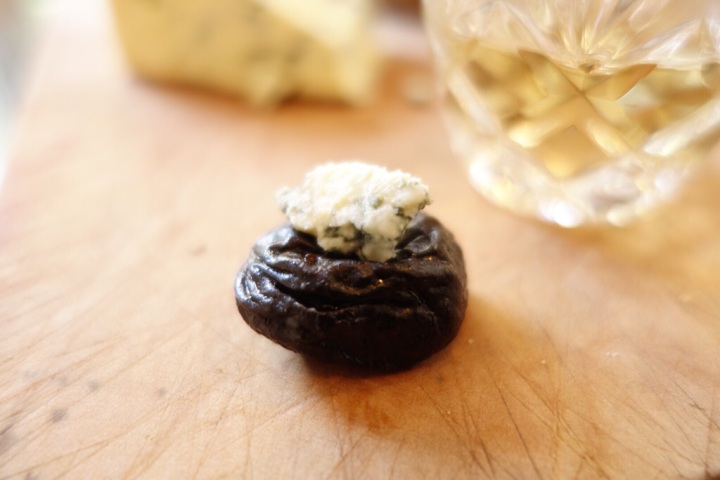 I nibbled this with prunes and a wee glass of Spanish Sherry, which seemed just right for my nostalgic trip down memory lane.