“I’m still fizzing about the Roquefort and Sauterne,” giggled my friend Kate after we’d devoured two cheese boards based on selecting, presenting and wine matching tips from my favourite cheese-onistas Fiona Beckett and Max McCalman. They were superb!  So in my next few posts I’ll share their wisdom with you. This post is on selecting cheese, the next on presenting and the final on wine matching.

There are three things they say to remember when choosing cheese: shape, texture, and a progression of tastes. So I started with one cheese, an anchor if you like and worked around that, choosing another two cheeses that contrasted in shape, texture and allowed a progression from youngest and lightest to the oldest and strongest. 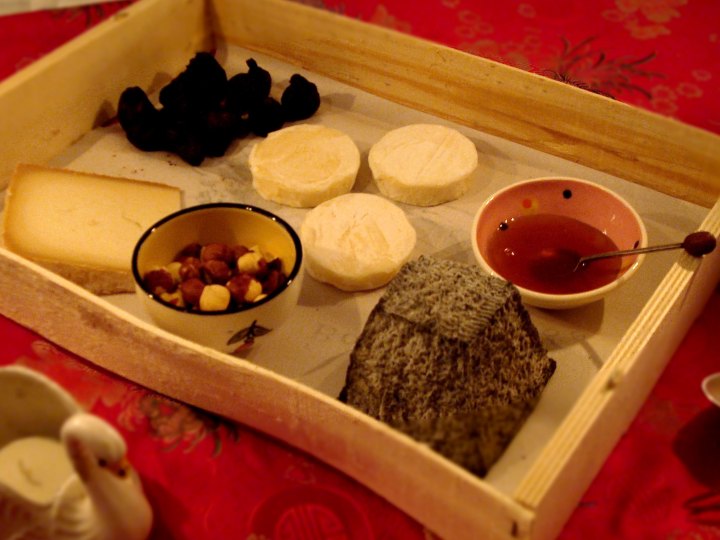 The anchor for my all-goats cheeseboard was the nutty, visually stunning ash-grey pyramid Valencay.  Surface ripened, it had a wrinkled outer rind, a silky ripening layer and a slightly chalky, centre. Next I was after a lighter, younger contrasting cheese.

Luckily Marche Francais had some young rounds of Cabecou. Pale yellow, dusted with white, these delicate discs were like the sweet bloom of youth against the Valencay’s gnarled, life-worn face. The texture too was melt in the mouth. Little puffs of lemony deliciousness, they sat well against the slight chew of the ash-dusted rind and the chalky end of the Valencay. Rog quipped they were ‘like tofu you want to eat’!

For the third cheese I was looking for something wedge-y and harder, older and more complex. How lovely that like humans, cheese gets more interesting and complex as it ages?

The Tomme de Chevre was just what I needed. This wasn’t the star of the show, it was unlikely that anyone remembered this one the day after, but it provided a base-note, a serious counter-point without which my other two beauties would’ve competed too much.

Sometimes giving palettes a ‘resting’ cheese is a good idea. Not bland per se, but a cheese that is easy and interesting without being the star – the straight man to the divas and comics.

I was pleased with my three cheeses, they looked fab and Fiona and Max’s principles of shape, texture and progression of tastes were fabulous on the eye, the the palette and the soul.

Next up I’ll look at how to pair wines, because that’s what’ll make a cheese board memorable.

6 thoughts on “Secrets to a great cheese board – Shape, texture, progression (Part 1)”